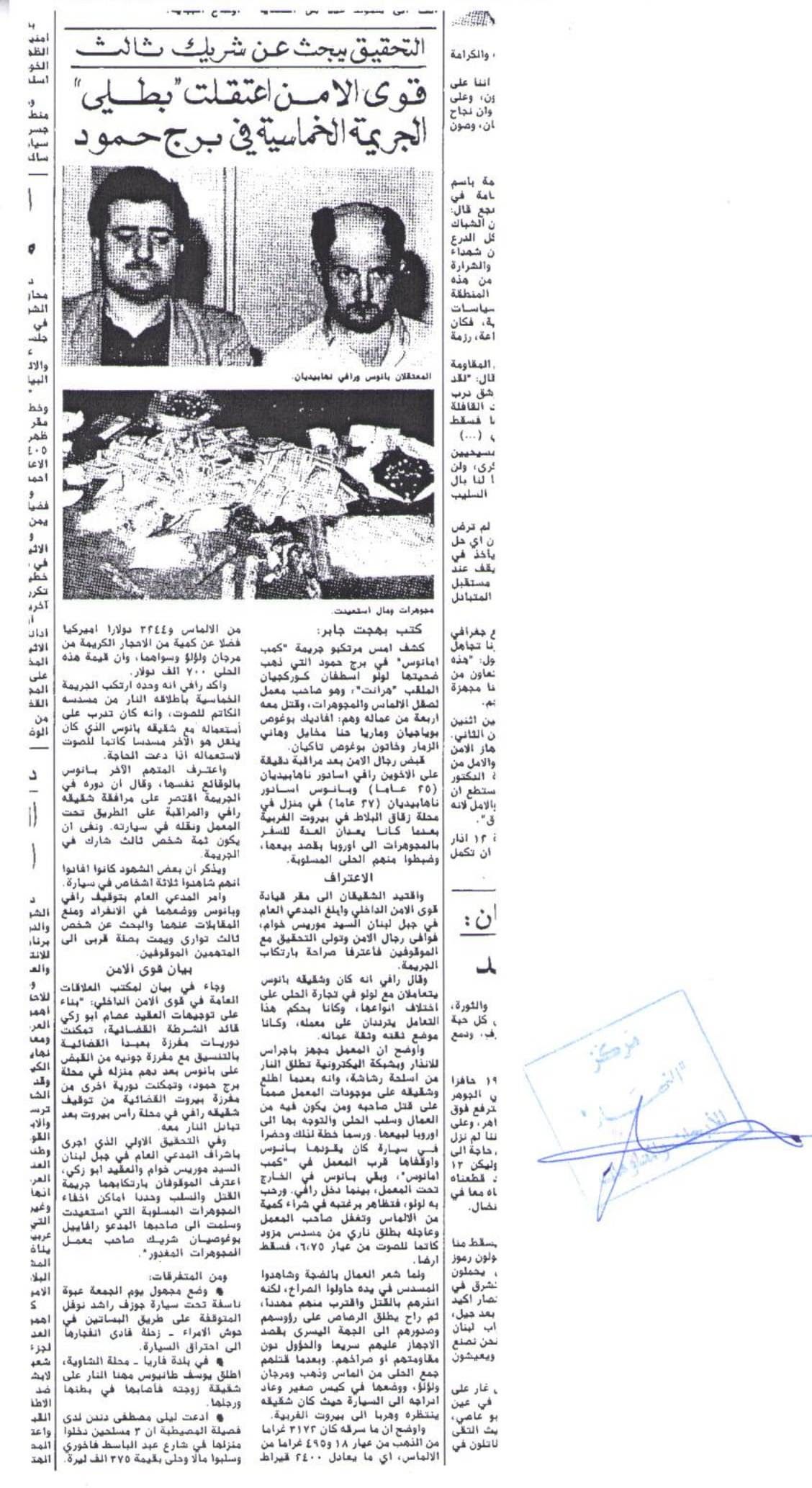 After a thorough investigation, the security forces were able to arrest the two brothers, Rafy Assadour Nahebtian (25 years) and Panos Assadour Nahebtian (27 years). They were found in a house in Zukak El Blat – West Beirut, packing the stolen goods that were to be sold in Europe. The looted objects were subsequently confiscated.

The two brothers were taken to the Internal Security Forces Headquarters, to testify before Mount Lebanon Attorney General Maurice Khawam, who met with the policemen. He apprehended the two brothers as they publicly confessed their crime.

Rafy admitted that he and his brother Panos had always traded all kinds of jewelry with the owner. They would visit the refinery regularly, earning the trust of both him and his employees.

He added that the refinery had security alarms and an electronic system that triggers sentry guns. According to him, he and his brother saw the goods in the refinery and planned to kill the owner and all the workers inside, in order to steal the merchandise and sell it in Europe. After having planned everything, they came in a car and parked it next to the refinery in “Camp Amanos”. One of them stayed outside, near the refinery, while the other went in. He was greeted by Hrant and pretended he wanted to buy a certain quantity of diamonds. Just as his attention was diverted, he shot him with a 6.75 mm suppressed pistol, causing him to fall on the ground.

When the workers heard the noise and saw the pistol in his hand, they tried to scream but he approached them and threatened to kill them, then he shot them in their heads and in the left side of their chests to neutralize them so that they don’t scream or resist. After murdering them, he gathered the goods consisting of diamond, gold, coral, and pearl and put them in a small bag before returning to the car. His brother was waiting for him inside and they fleed towards West Beirut.

Rafy stated that he had stolen 3172 grams of 18-carat gold, 495 grams of diamond, the equivalent of almost 2400 carats, 3244 U.S. Dollars, and a variety of precious stones like coral, pearl and others, estimated at 700 thousand dollars.

He asserted that he had singlehandedly committed the 5-person murder by opening fire with a suppressed pistol he had learned to use with his brother, who was also carrying his own to use if necessary.

The other accused Panos Assadour Nahabedian confessed the same facts and said that his role was only to accompany his brother, take him back and provide surveillance under the refinery. He denied the involvement of a third accomplice in the crime.

But some witnesses claimed to have seen three persons in the car.

The Attorney General asked for the two brothers to be arrested and put in seclusion with no interviews conducted. He also ordered the search for a third party that would succumb to the interrogations and reveals his ties to the arrested suspects.

According to the Internal Security Forces’ Public Relations Office: “Given the instructions by Chief of Judicial Police, Colonel Issam Abou Zeki, the patrols of the Baabda platoon, in coordination with the patrols of the Jounieh platoon were able to arrest Panos after raiding his house in Burj Hammoud. Another patrol from the Beirut platoon arrested his brother Rafy in the city of Ras Beirut, after an exchange of fire.

During the preliminary investigation supervised by Mount Lebanon Attorney General Maurice Khawam and Colonel Abou Zeki, the two arrested individuals confessed the crimes of burglary and murder and revealed the location of the jewels stash. The latter was recovered and restored to its owner, the associate of the murdered jewels refinery owner.”

Goods and money were also stolen from the refinery.