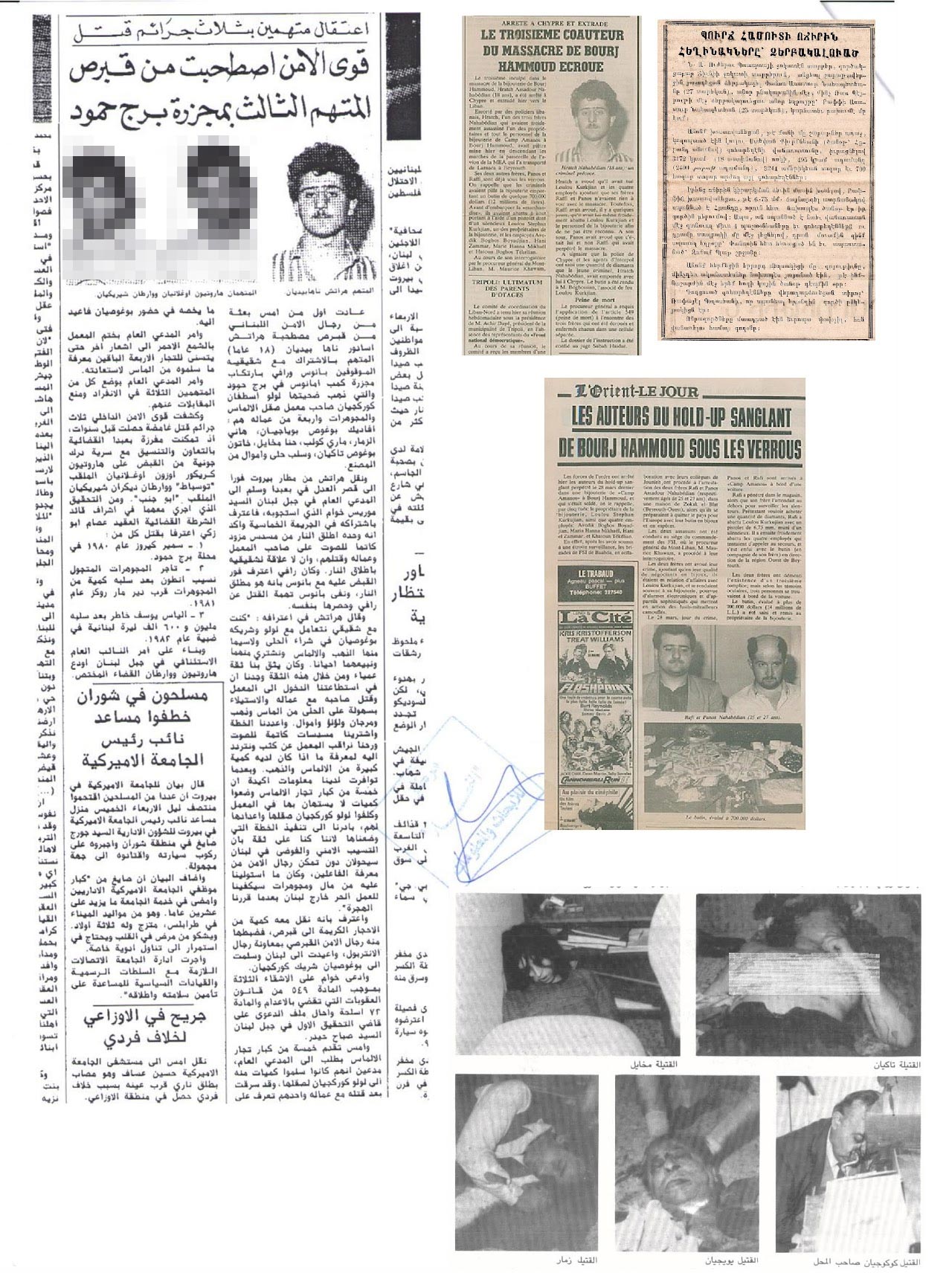 A Security Forces unit came back from Cyprus the day before yesterday to escort Hratch Assadour Nahabedian(18 years old), accused of involvement with his two arrested brothers Panos and Rafy in the massacre of “Camp Amanus” that took the life of the owner of a jewels refinery Hrant Kurkdjian and four of his workers: Maria Hanna Mekhayel, Khatoun Boghos Tekeyan, Hani Zemmar and Avedik Boyadjian.

The accused Hratch Nahabedian was brought immediately from the Beirut airport to the Court of Baabda. He was taken to face Mount Lebanon Attorney General Maurice Khawam who interrogated him. He confessed his involvement in the five-person murder and asserted that he was the only one to open fire and kill the owner of the refinery and his workers, using a suppressed pistol. He claimed that his brothers did not open fire. Immediately upon his arrest, Rafy confessed that he was the one who shot and denied that Panos did anything of the sort.

In his confession, Hratch said: “I was with my brothers negotiating with Hrant Kurkdjian and his associate, to buy the goods, notably gold and diamond, then sell them. He trusted us, and that’s what instigated us going inside the refinery, killing him and his workers, and laying our hands on the goods that consisted of diamond, gold, coral, pearl, and money. We had a plan and we bought pistols with suppressors, then we started visiting the refinery and observing it closely to see whether there were enough gold and diamond. When we discovered that five of the biggest diamond traders in the country had deposited considerable amounts of merchandise to be refined and prepared, we started implementing the plan we had put in place. We took advantage of the reigning chaos and lack of security in Lebanon to remain sheltered from the investigation. The money and jewels we had in our possession would let us do free trade outside Lebanon after we decide to live abroad.”

Hratch admitted that he had transported some of the precious stones to Cyprus, where they had been confiscated by the Cypriot Police in collaboration with the INTERPOL, and sent back to Hrant Kurkdjian’s associate in Lebanon.

Khawam condemned the three brothers in accordance with law # 549 of sanctions code that authorizes capital punishment, and the case was referred to first examining magistrate in Mount Lebanon Sabah Haidar.

Five of the biggest diamond traders sent a request to the Attorney General, claiming they had deposited amounts of diamond that were stolen after the murder of Hrant Kurkdjian and his workers.