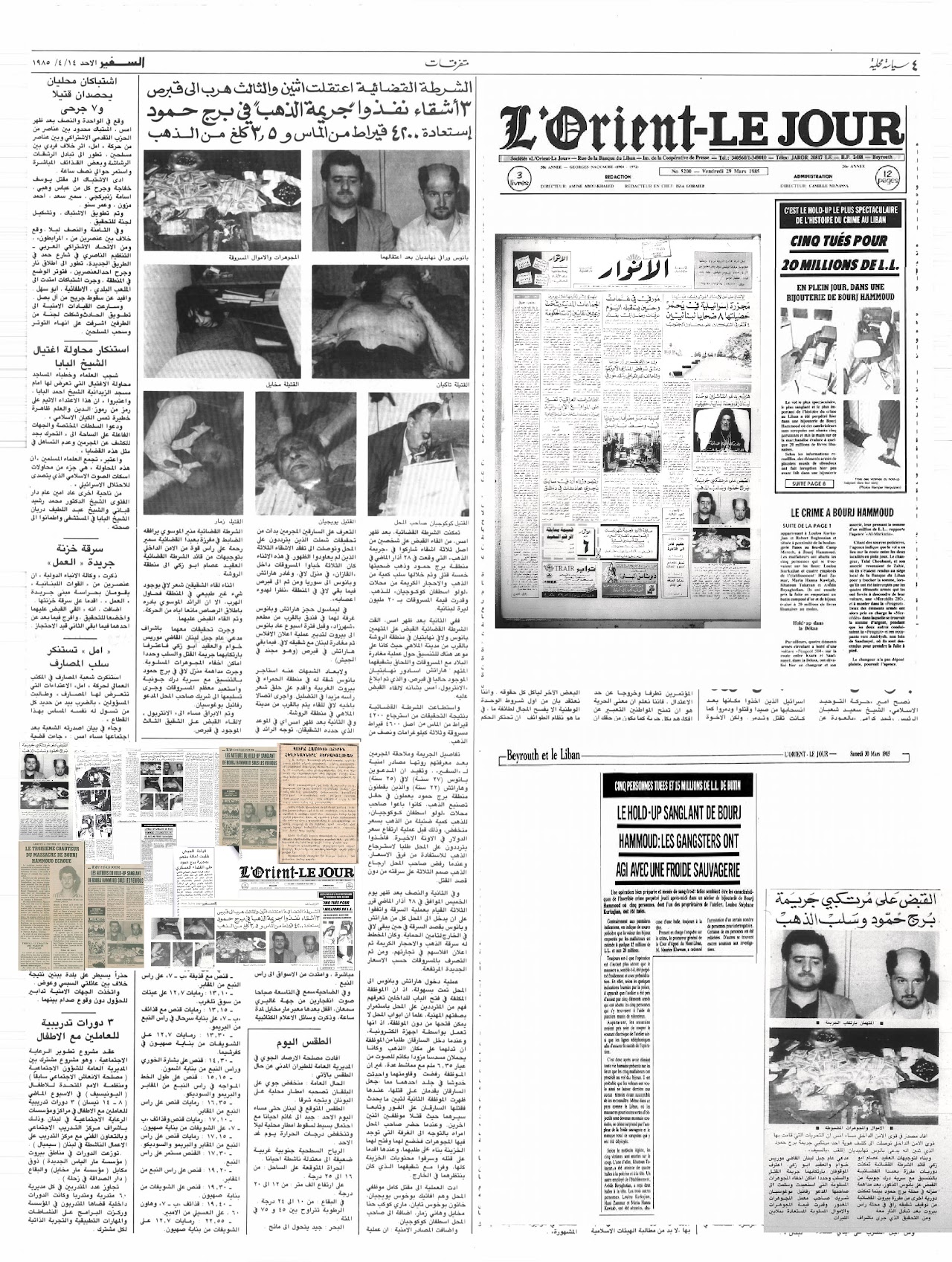 Yesterday afternoon, the judicial police arrested two out of three brothers who took part in the “Gold Crime” which took place on the 28th of last March in the area of Bourj Hammoud. Five people were killed and a quantity of gold and precious stones were stolen from the Loulou Stefan Kurkdjian gold shops. The value of the stolen goods was estimated at 20 million Lebanese pounds.

Yesterday at 2 p.m, the judicial police arrested the accused Panos and Rafi Nahabedian in the area of el-Rawshe near the amusement park. They were on a date to coordinate the process of leaving the country with the stolen goods and catch up with their brother, the accused "Hratch Assadour Nahebtian ”. Hratch is currently in Cyprus and the Interpol was informed about him yesterday to arrest him.

As a result of the investigations, the judicial police recovered 4200 stolen carats of diamonds out of 4600 carats and 3.5 kg of gold.

The security sources narrated to “Al-Saffir” newspaper the details of the crime and the pursuit of the criminals after their knowledge. It stated that the called Panos (27 years), Rafi, (25 years) and Hratch (22 years), who live in Bourj Hammoud, are working in the gold processing field. They have sold the owner of the gold shops "Loulou Stefan Kurkdjian" a small amount of gold at a low price, and that before the recent rise in the dollar. They frequented the shop asking to get back the gold in order to take advantage of the price difference. But, when the shop owner refused to return the gold, the three men planned to steal it without intent to kill.

At 2:30 p.m on Thursday the 25th of last March, the three men decided to carry out the robbery. They agreed that both Hratch and Panos will enter the shop in order to steal while Rafi stays outside to secure protection. The plan was to steal the gold and the precious stones and then they declare bankruptcy in their trade. After that, they use the stolen goods according to the new high prices.

The entry of Hratch and Panos to the shop was easy as the employee in charge of opening the door to the entrants knows them since they come constantly to the shop due to their professional capacity. It is known that the doors of the shop cannot be opened without the employee, as it works by electronic devices. When the robbers entered, they asked the employee to show them the location of the gold and they were holding a gun provided by a muffler of a 6.35 mm caliber with several cartridges. However, the employee refused, resisted them and caused scratches in the skin of one of them which led the thieves to kill her. Then, the second employee showed up to see what was happening and the two thieves killed her instantly. They continued to walk and killed two other employees. When the owner of the shop came, they ordered him to go to the room where the jewelry was located. He did what they asked him to do and opened the treasury based on their request. Then, they killed him, stole the contents of the entire treasury and fled with their brother who was waiting for them outside.

The process caused the death of the entire staff of the shop and they are Avetik Boyajian, Khatoun Tekeyian, Maria Kawkab Hanna Mikhael and Hani Zammar, as well as the owner of the shop, Hrant Kurkdjian.

The security sources added that the process of identifying the robbers was initiated by investigations which included those who frequented the shop and it came to search for the three brothers, who did not reappear. In the meantime, the three hid the stolen goods inside the wall in the house of Rafi. Hratch and Panos left to Syria and then to Cyprus while Rafi remained in the region due to his calm temper.

In Limassol, Hratch and Panos booked a room for two at a hotel near the restaurant "Scheherazade". A week ago, Panos returned to Beirut to manage the process of declaring bankruptcy and then leaving Lebanon with his brother Rafi while Hratch remained in Cyprus (he is a conscript in the army).

To avoid suspicions, Panos rented an apartment rented in the Hamra area of West Beirut and shaved his hair to increase the misleading. Then, he called his brother Rafi to meet near the amusement park in Raouche.

Yesterday at 2 p.m, on the date specified by the two brothers, the major of the judicial police, Mounir al-Moussawi, accompanied by the officer in the Baabda judicial detachment, Samir Rahmeh, oriented to el-Rawche area on the head of the Internal Security Force under the guidance of the leader of judicial police Colonel Issam Abou Zaki.

During the meeting, Panos felt that there was something wrong in the area so he tried to escape. However, the major al-Moussawi fired him, preventing him from moving and then they arrested them.

The investigations with them were carried out under the supervision of the Public Prosecutor of Mount Lebanon, Judge Maurice Khawam and Colonel Abou Zaki. The criminals acknowledged the murder and the robbery and located the places where the stolen jewelry was hidden. Rafi's house was raided in Bourj Hammoud in coordination with the brigade police of Jounieh. Most of the stolen goods were recovered and were given to the owner's partner named Rafael Boghossian.

In the evening, the Interpol was telegraphed in order to arrest the third brother in Cyprus.