The blood jewelry which Albert de Monaco is admiring

The blood jewelry which Albert de Monaco is admiring 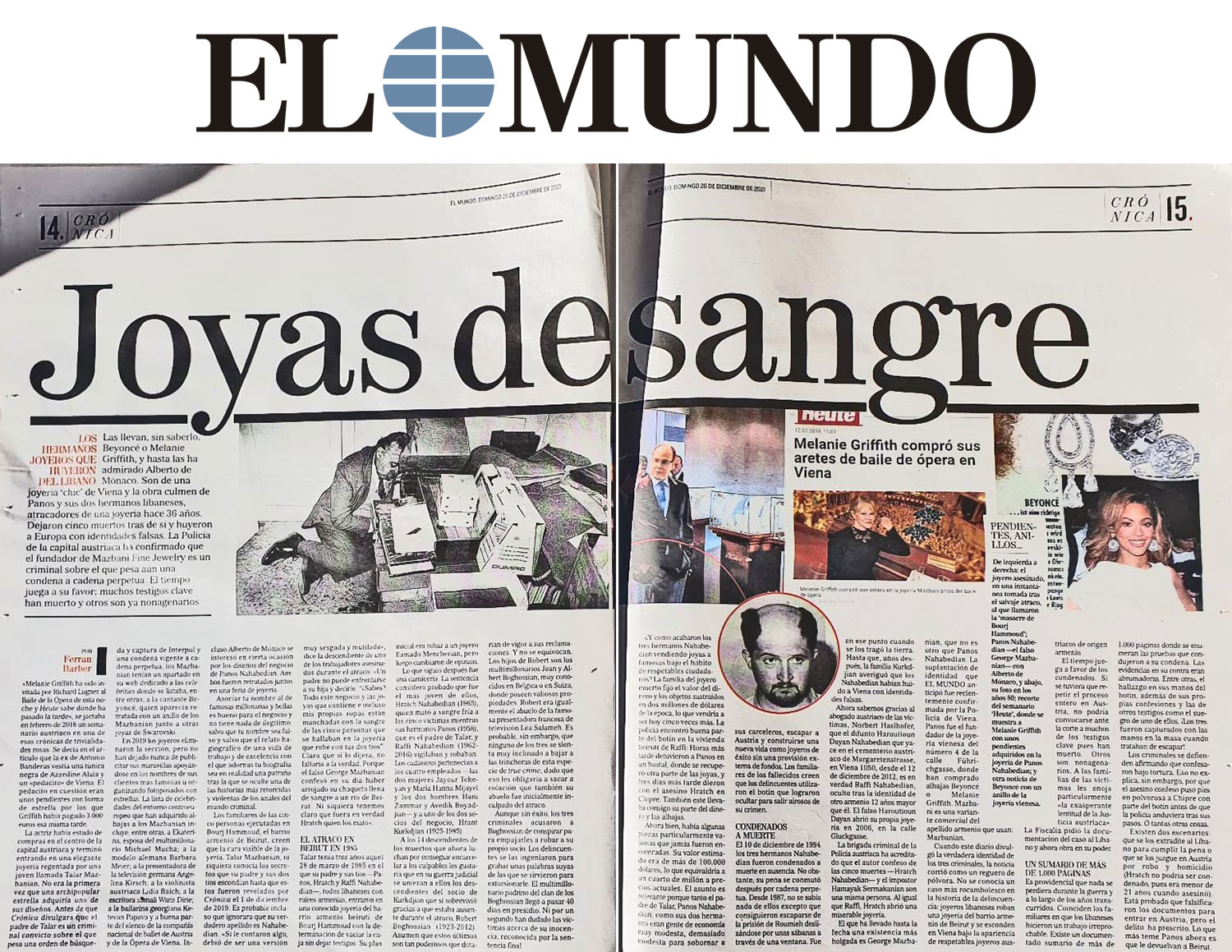 'Melanie Griffith has been invited by Richard Lugner to an Opera night dance, and Heute knows where she spent the afternoon ', posted in February 2018 by an Austrian weekly magazine in one of those stories of pink trivia.

It was said in the article that the ex of Antonio Banderas was wearing a black tunic made by Azzedine Alaia and a « part » from Vienna.

This « part » was some earrings star shaped, for which Griffith paid 3000 euros the same afternoon.

The actress has been shopping in the center of the Austrian capital and ended up entering an elegant jewelry store run by a young woman called Talar Mazbanian.

It was not the first time that an arch-popular star acquired one of her designs. Before Chronicle disclosed that Talar's father is a convicted criminal, that there is an Interpol's search and arrest warrant and a current sentence of life imprisonment against him, the Mazbanians had a section on their website dedicated to celebrities where, among them, the singer Beyoncé, was pictured with a ring of the Mazbanian along with other Swarovski jewels.

In 2019 these jewelers removed the section, but have never stopped advertising about the names of their famous clients, or organizing photoshoots with stars. The list of celebrities from the Central Europe who have acquired jewelry from the Mazbanians includes, among others, Ekaterina, wife of the billionaire Michael Mucha; German model Barbara Meier; German television presenter Angelina Kirsch; Austrian violinist Lidia Baich; Somali writer Waris Dirie; Georgian dancer Ketevan Papava and a good part of the cast of the Austrian National Ballet Company and Vienna Opera.

Even Albert of Monaco was interested, during some occasions, in Panos Nahabedian’s business designs. They were both taken in photos together at a jewelry fair.

Beyoncé with jewelery earrings in a clipping from 'Heute' magazine

Associating your name with that of famous millionaires and beautiful women is good for the business and there is nothing illegitimate in it, unless your name is fake and except that the hagiographic story of a life of work and excellence with which you adorn your biography is actually a humbug which hides behind one of the most twisted stories and violence from the annals of the criminal world.

The relatives of the five people executed in Bourj Hammoud, the Armenian neighborhood of Beirut, believe that the visible face of jewelry, Talar Mazbanian, did not even know the secrets that her father and her two uncles were hiding until these were revealed by Chronicle on 1st of December 2019. It is probable that she was even unaware that her real surname is Nahabedian.

« If they told her something, it must have been a very slanted and garbled version », says the descendant of one of the workers killed during the robbery. «A father can’t confront his daughter and say, « You know, all this business and the jewelry and even my own clothes that we own are stained with the blood of the five people who were in the jewelry that I stole with your two uncles. » Of course, if he had said so, it would not be untrue. Because the fake George Mazbanian once confessed about having thrown his jacket full of blood into the river of Beirut. It’s not even clear if it was really Hratch who killed them. »

Talar was three years old in March 28, 1985, the day her father and her uncles -Panos, Hratch and Raffi Nahabedian-, all Lebanese with Armenian roots, entered a well-known jewelry store in the Armenian quarter of Beirut, Bourj Hammoud, with a firm decision to empty the box without leaving any witnesses. Their initial plan was to rob a jeweler named Mencherian, but then they changed their minds.

What followed was a carnage. The sentence considered that it was the youngest of them, Hratch Nahabedian (1965), who killed the five victims with cold blood while his brothers Panos (1958), who is Talar's father, and Raffi Nahabedian (1962-2012) watched and stole. The corpses belonged to the four employees - the two women Khatoun Tekeyan and Maria Hanna Mikhayel and the two men Hani Zammar and Avedik Boyadjian- and one of the two business partners, Hrant Kurkdjian (1925-1985).

The 14 descendants of the five dead who now fight for getting the guilty in jail, wish that the descendants of Kurkdjian's partner will join them in their judicial war.

Kurkdjian's partner Robert Boghossian (1923-2012) survived because he was absent during the robbery,They assume that the latter are so powerful that it would give vigour to their claims. And I don’t know if they are wrong. Robert's children are billionaires Jean and Albert Boghossian, well known in Belgium or Switzerland, where they have valuable properties. Robert was also the grandfather of the famous

French television presenter Léa Salameh. It is probable, nevertheless, that any of the three persons feel much induced to go down in the trenches of this kind of true crime, since that would force them to admit that their grandfather was also initially accused of the robbery.

Although, in vain, the three criminals accused Boghossian of conspiring to push them to rob his own partner. The criminals managed to record some of his words, which they used later to extort money from him. The Billionaire Godfather of the Boghossian clan spent 40 days in prison. Neither for a second the victims have doubted his innocence, recognized by the final sentence.

And how did the three Nahabedian brothers end up selling jewelry to famous under the habits of respectable citizens? The family of the dead jeweler fixed the value of money and stolen items at two million dollars at the time, which would be today five times more. The police found a good part of the swag in the house of Raffi in Beirut. Hours later they arrested Panos in a hostel, where another part of the jewels was recovered, and three days later they found the murderer Hratch in Cyprus. Also, this leads them to other parts of the money and the jewelry.

Now, there were, in particular,some valuable pieces that never were found. Its estimated value was more than 100,000 dollars, which would be equivalent to a quarter of a million at market prices now.

The matter is relevant because Talar's father, Panos Nahabedian, like his two brothers were economy people, very modest, and even too modest to bribe their jailers, escape to Austria and build a new life as successful jewelers without an external provision of funds. Relatives of the deceased believe that these criminals used the booty they managed to hide to get away from their crime. 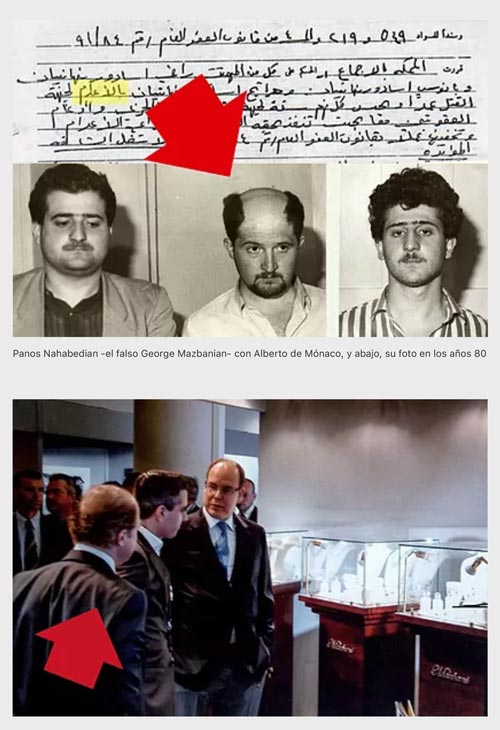 Panos Nahabedian -the fake George Mazbanian- with Alberto de Monaco, and below, his photo in the 80s

On December 10, 1994 the three Nahabedian brothers were sentenced to death in absentia. However, their grief was later reduced to life imprisonment. Since 1987, it was heard nothing about them except that they managed to escape from the prison of Roumieh by sliding down some bed sheets through a window.

It was at this point that the earth swallowed them up. Until that, years later, the Kurkdjian family found out that the Nahabedians had fled to Vienna under fake identities.

Now we know from the Austrian lawyer of the victims, Norbert Haslhofer, that the late Haroutioun Dayan Nahabedian who lies in the Austrian cemetery of Margaretenstrasse, in Vienna 1050, since December 12, 2012, is truly Raffi

Nahabedian, hiding behind the identity of another Armenian man, 12 years older than him. The fake Haroutioun Dayan opened his own jewelry store in 2006, in Gluckgasse Street.

The criminal squad of the Austrian Police has proven that the confessed author of the five deaths -Hratch Nahabedian- and the impostor Hamayak Sermakanian are the same person. Like Raffi, Hratch opened a miserable jewelry store.

The one who has led the best existence to date is George Mazbanian, who is no other than Panos Nahabedian. The identity impersonation that EL MUNDO anticipated was recently confirmed by the Vienna Police. Panos was the

founder of the Viennese jewelery shop at 4 Führichgasse, where Beyoncé or Melanie Griffith have bought jewelry. Mazbani is a commercial variant of the Armenian surname he used: Mazbanian.

When this newspaper disclosed the true identity of the three criminals, the news spread like wildfire. There were never a more bizarre case in the history of crime:

hide in Vienna under the guise of respectable jewelers Austrians of Armenian origin.

Time plays in favor of the convicted. Unfortunately, If the entire process had to be repeated in Austria, many key witnesses could not be summoned before the court because many of them are dead. Others are nonagenarians. Victims' families are particularly angry from "the infuriating slowness of the Austrian Justice." The Prosecutor's Office requested the documentation of the case to Lebanon authorities, which is now in their possession.

It is providential that nothing was lost during the war and throughout the years gone by. Family members agree that the Lebanese authorities did an irreproachable job. There is a documented summary of more than 1,000 pages listing the proofs that

led to their conviction. The evidence against them was overwhelming. Among others, the discovery of the swag in their hands, in addition to their own confessions and those of other witnesses such as the father-in-law of one of them. All three were caught handcuffed in front of the crowd when they tried to escape!

The criminals defend themselves by claiming that they confessed under torture.

But that does not explain, however, why the confessed murderer took to his heels to Cyprus with some of the swag before the police follows in his footsteps. Or so many other things.

There are two scenarios: either they are extradited to Lebanon to comply with the

punishment or trial in Austria for robbery and murder (Hratch could not be convicted, as he was under 21 years of age when he assasinated them). It is proven that they falsified the documents to enter Austria, but the crime has been prescribed. What Panos fears most now is to be forced to return to Beirut.